Learn more about this traditional event where families and friends meet every summer.

The Schueberfouer, Did you know?

Do you already know the story of the Schueberfouer?

The big traditional fair in Luxembourg, called ‘Schueberfouer’ in Luxembourgish, attracts around two million visitors every year, making it one of the largest events in the region and a much-anticipated occasion to meet with friends and family. It takes places every year from the end of August to the beginning of September and is an attraction that reflects the diversity of the country, its inhabitants and Luxembourg City.

Above all, with around 180 rides and games, 100 stalls and restaurants, it's a huge fairground to have fun at. Here you can taste regional products and dishes and try out many games.

The Schueberfouer was founded in 1340, when John the Blind, Count of Luxembourg founded an eight-day market week for the occasion of Saint Bartholomew's Day. At that time, it was a market of great economic importance. The monarch wanted to improve the economic competitiveness of Luxembourg  - after all, the country was geographically ideally located on the new road connecting Italy and Flanders.

From the end of the 16th century, traders also offered cattle, pigs, sheep, goats and horses at the fair and the strategic and economic importance of this hub continued to increase.

Thanks to the Industrial Revolution in 1844, entertainment in the form of rides became an integral part of the fair for the first time.

Since 1893 the Schueberfouer takes place on the Glacis (Champs de Glacis).

The traditional clearance sale of Luxembourg City, the so-called Braderie, was launched in 1929 by the Schueberfouer.

During the WWII, the Schueberfouer was temporarily suspended. Later, foreign dealers and showmen were admitted again - and eventually the event regained its former importance.

On the ‘Kirmes’ day, musicians with sheep will roam the streets of Luxembourg City and play the ‘Hämmelsmarsch’ (Mutton March) for the Schueberfouer celebrations. The local shooting club used to organize a shooting competition every year with a sheep as the main prize. At the opening of the fair, the ‘Hämmelsmarsch’ is played to this day in the middle of a herd of sheep.

The fair mascot is ‘Lämmy’, a sheep dressed in the traditional clothes of the Hämmelsmarsch musicians. The traditional food specialty of the fair is the ‘Fouerfësch’, brewer's yeast-fried whiting, served with French fries and a glass of beer or dry Mosel wine.

The name or the Luxembourgish term Schueberfouer goes back to ‘Schuedbuerg’, the fortress on today's Plateau de St Esprit, where the market took place first. It later became the ‘Schadebergermesse’ and later on in Luxembourgish ‘Schueberfouer’.

Come and experience this historic folk festival during a late summer trip to Luxembourg!

To learn more about this year's edition, please click on the image 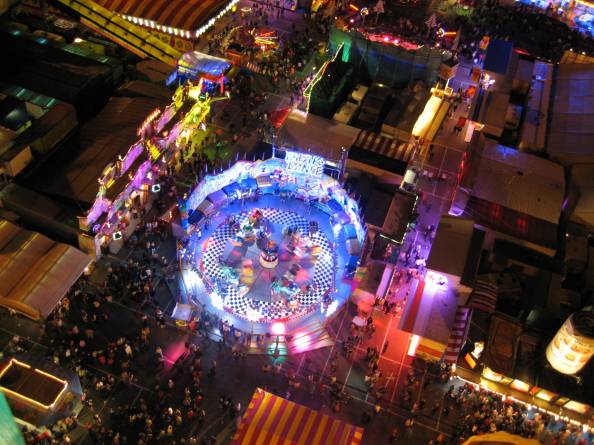 Enjoy free access to more than 60 museums and tourist attractions in Luxembourg.